For his recipe I decided to go back to my Grandmother Binns. An extremely talented, friendly, and well rounded Irish woman. She was a tough bird let me tell you. She raised ten children, got a college education, worked as a teacher in the school, and still was able to put dinner on the table every night. I remember her fondly. Every Sunday after mass the entire family would arrive at her house for Sunday breakfast. She made it all. Eggs, bacon, sausage, pancakes, toast, grapefruit, coffee, etc.; it was all there. She not only fed just me and my siblings but all of the cousins. It was a spectacular event when any of the twenty three first cousins and family where in town. The kitchen was so full that tables had to be placed all throughout the living room and dining room just to hold all of us. Even the priest and nun were presented at times. Those were some great times. As an Irish woman she cooked a lot of the traditional foods of her culture. I have recreated a few of them on her before. When trying to come up with another I had to ask my father and aunt about some dishes I had never had before but that they remembered fondly. One in particular was her bread pudding. After compiling all the ingredients that she used I had the help of my chef at the restaurant I work at to provide me with a simple recipe for the bases of a good bread pudding. Grandma Binns' pudding had a combination of flavors in it. She used peaches, raisins, and some brandy to help create a wonderful array of flavors in your mouth. She even went as far as to create a meringue that she topped the whole thing. Leona O'Connor Binns' Brandy Bread Pudding.
Ingredients:
1. Preheat oven to 400 degrees.
2. Cut French bread into halves, then half again and cut into little square chunks and set in large bowl.
3. Mix sugar, cinnamon, nutmeg, and allspice in a bowl.
4. In a sauce pot scald cream over high heat.
5. Combine egg yolks and sugar mixture together in bowl and whisk until pale yellow.
6. Temper cream mixture into the egg yolk mixture.
7. Pour egg/cream mixture into bread bowl and combine and let sit to cool for 30 minutes.
8. Dice up into chunks the peaches and mix into bread custard bowl.
9. In another sauce pan pour raisins and brandy and simmer over medium high heat to cook off some of the alcohol and hydrate the raisins.
10. Drain raisins and combine into the bread mixture.
11. In a 9 x 13 greased glass pan pour bread mixture. Sit pan inside a larger glass pan and pour water in around the bread pudding pan to create a water bath around and bake covered with tinfoil for 45 minutes until the pudding has settled.
12. Meanwhile take the egg whites and mix with a hand mixer until stiff peaks have form. Combine the other 1/2 cup sugar to flavor the meringue.
13. Remove pudding from oven, pour the left over cooked brandy over the top of the pudding, spread with the meringue and place back in the oven uncovered and not inside the water bath to brown the meringue for about 15 minutes.
14. Let cool before serving.
This bread pudding was so light and crisp it was amazing how delicious it was. The flavors of the peaches, raisins, brandy, were all light and not overpowering that you can eat a couple pieces before feeling guilty for eating such a rich dessert. It definitely brought back memories to my aunt and father that they had not had in over 30 years.
Prep Time: 30 minutes
Cook Time: 55 minutes
Serves: 4-5 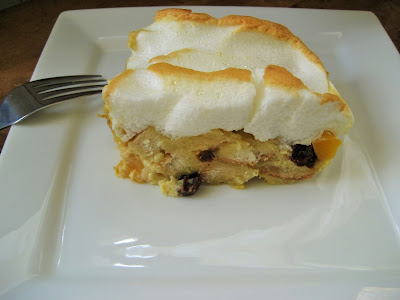 Posted by Blog By Binns at 11:58 AM No comments: Links to this post

It is fall here in WV and the leaves are starting to change, festivals are beginning, and the air is becoming more crisp. What better dish to make for the change in the season then a good pot of chili. This chili is so easy and packed full of flavor that everyone who tries it will fall in love. It can be made quickly in a pot on the stove or even in a crockpot if you do not have time to sit and watch it. Campfire Chili.


1. In a large pot or Dutch oven, brown your beef and sausage over medium heat.

2. Stir in diced white onion, garlic, and green bell pepper and cook until tender. Salt and pepper to taste.

5. Drain and toss in the kidney and black beans. Simmer on low for another 20 minutes.

Delicious and full of flavor. Campfire Chili will become your favorite. 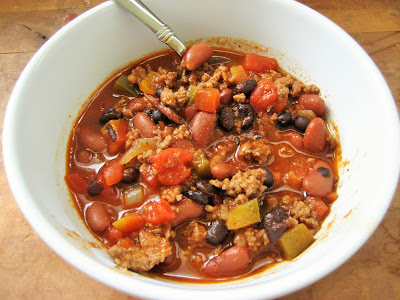 Posted by Blog By Binns at 8:50 AM No comments: Links to this post

Sitting on the same cobblestone patio where I had my taste of stuffed zucchini flowers. The air is sweet with the smell of lemons and flowers. There is a breeze coming off the ocean below. The sun is about to set and the sky is filled with the most beautiful colors of red, orange, and yellow. The music playing overhead is that of an accordion that is softly putting me in a relaxing state. I had just finished the zucchini flowers and am taking a nice lengthy sip from my wine glass. The lovely lady brings me a dish and gently sits it in front of me. I beautiful plate of gnocchi with fresh prawns gently lining the parameter of the dish. The sauce is so light and barely looks as if it is even on the plate. It is the color of light orange and glistens in the sunlight. The smell is that of fresh peppers with hints of lemon. I take my first bite and fall deeply in love. I call this dish Praiano Shrimp Gnocchi.
Ingredients:

1. Take the orange bell pepper and place it in the broiler or on a grill to roast and blacken the outer skin.

3. Add a drizzle of olive oil and puree the pepper until you have a smooth peppered liquid.

4. In a large saute pan drizzle a bit of olive oil and saute the garlic until fragrant.

5. Mix in the pepper puree, tomato juice, and white wine. Bring to a slow simmer and cook until the
liquid has reduced by half.

6. Juice as much from the lemon as possible and place into the pan.

7. Place your peeled and deveined shrimp into the pan.

8. Stir in the diced basil, cover, and simmer until the shrimp have cooked through.

9. Toss with homemade gnocchi and sprinkle some fresh parsley over top.

This was such a good dish and tasted just like I remember from that balcony in Praiano. A sweet tasting sauce, light, with flavors of the roasted pepper, the lemon accent, and the fresh shrimp. It was amazing. Give it a try. 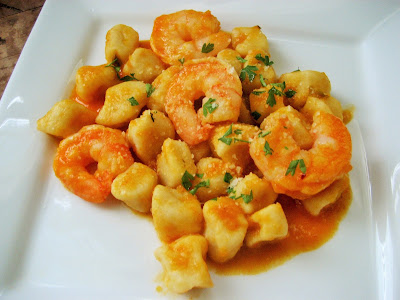 I bought these great tuna steaks at my local market and really wanted to make a blackened fish dish and top it with  a fresh tomato and basil type of relish . Blackening seasoning is easy to make. It just takes a few almost equal part ingredients to make a delicious seasoning. If you do not have all these in your spice rack, you can simply buy a good one at your local store. I had some fresh cherry tomatoes, both orange and red, and of course still have plenty of fresh basil. Grill the fish on both sides, broil quickly, and then serve with the fresh sautéed tomato basil mixture and viola, a fantastic fish dish. Blackened Tuna.

1. Take your fresh tuna steaks and pat them dry.
2. Mix all blackening ingredients together. Sprinkle some blackening seasoning on both sides of the tuna steaks.

3. In a large sauté pan or on a grill brown the steaks on both sides for about 1 minute each side.
4. Remove and set steaks in broiler just to cook for about 3 minutes. (I like my tuna steaks rare).


5. In same sauté pan, toss in the tomatoes, chopped basil, garlic, and some white wine. Sauté until just warmed through.
6. Serve steaks with a spoon full of the tomato basil on top.

This was a surprisingly fresh, healthy, and delicious seafood dish. I loved it. I gave some to my friend and they loved it.
Prep Time: 10 minutes
Cook Time: 15 minutes
Serves: 2 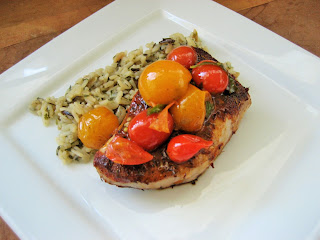 Posted by Blog By Binns at 9:12 AM No comments: Links to this post